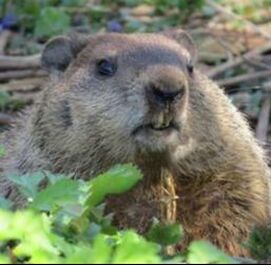 At Loomacres Wildlife Management Inc. we have been dealing with nuisance wildlife for over 20 years across the entire country and even in the United Kingdom. We have done wildlife control or wildlife damage management on airports, landfills, golf course, municipalities, fish hatcheries, and even your run of the mill farmer or landowner.

When does a wild animal become a nuisance? Are certain species always nuisances while others never qualify? There is no universal answer because people react differently to wildlife. For most people, “nuisance wildlife” means an animal is destructive or menacing. The animal may be damaging property such as buildings, crops, pets, livestock, gardens, or public parks. Wildlife may threaten human health or safety by spreading diseases; through direct attacks; or accidentally, because of collisions with cars, airplanes, or trains. Most wild animals just mind their own businesses and never cause a conflict with people. In fact, many people deeply enjoy their interactions with wildlife.

Many wildlife conflicts can be explained with two words: food and shelter. Provide them intentionally or accidentally, and some wild animal will probably accept the invitation. Surprised? As human development spreads, wildlife conflicts happen more frequently. The competition for natural sources of food and shelter increases, enticing some animals to seek their living in our world. At the same time, some species adapt to these new opportunities so well that their populations rise dramatically, further increasing the chance of a conflict with people.

There are several different methods used to control wildlife, some are lethal and others non-lethal. Here is a list of services we offer in either harassing or removal of nuisance wildlife.

Nuisance Trapping: Trapping is a method that goes back to the beginning of time and is one of the most effective ways to reduce wildlife on land or in water. If you are having issues with Beavers, muskrats, raccoons, coyotes, woodchucks, etc. an effective trapping program might be the way to go to eliminate your wildlife damage.  Trapping can be both lethal and non-lethal depending on the nuisance species and recommendation from our staff biologists.

Hazing: Depending on the species of wildlife hazing might be in order. At Loomacres Wildlife Management we use everything from propane cannons, border collies that are trained, lasers, and even remote-controlled boats or cars to haze wildlife and disperse them from unwanted areas.

Habitat Management: Just about all wildlife need the same three things. Food, water, and shelter. By assessing the property and the wildlife on it, some simple solutions or modifications to the habitat may be all you need to deal with the nuisance wildlife.

Depridation: In some extreme cases eliminating the species completely might be the only solution. Several laws and regulations come in to play and special permits need to be obtained. Loomacres Wildlife Management will obtain all necessary permits to stay in compliance with all local and federal laws. 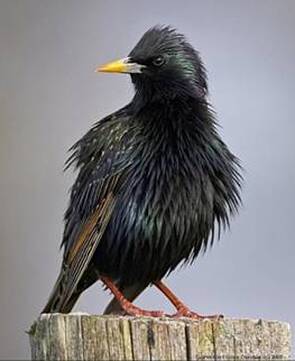 European starling is a native to Europe and was introduced to North America in the 1890s by William Shakespeare enthusiasts. Since the introduction of 100 individuals in Central Park, New York; starlings colonized the majority of North America, ranging from Alaska to Mexico; with an estimated population of over 200 million.

Starlings are typically associated being around human activities, and are often found in urban settings that provide an ample supply of forage, roosting and nesting habitats. Starlings are a cavity nesting species, utilizing a broad array of habitats such as trees, bird houses and buildings. Starlings can be aggressive when selecting nesting locations and can out-compete native species.  Read More
Coyotes 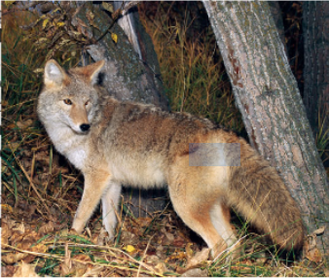 The coyote (Canis latrans) is a widespread member of the dog family.  They range in size from 20 – 50 lbs, and are larger than a fox but smaller than a wolf.  Coyotes can be identified by a slender muzzle and pointed ears.  They also have a bushy tail that often has a black tip.  Their fur is often a grayish-brown or yellow, however, all black and albino coyotes have also been observed.

Coyotes are an extremely adaptable species.  This allows them to utilize almost any habitat found in North America.  They can be found in deserts, arctic tundra, swamps, forests, grasslands, and cities.  They are also excellent swimmers, and can occupy islands far from shore.  Read More 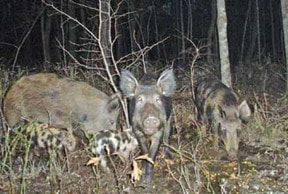 The first feral hogs were introduced in the 1800’s by settlers as a food source. Most of these introductions occurred in southern states, and the hogs quickly adapted to the wild. These pigs rapidly reproduced and colonized vast areas of the southern United States. Since then feral pigs have spread to or been released in at least twenty nine states, with more states possibly infested. The large majority of feral swine are descendants of domestic pigs, but there are also a growing number of escaped Eurasian wild boars and hybrid individuals. Most of these types escaped from hunting or breeding preserves, and are perfectly adapted to northern climates. Here in New York the recently discovered feral pigs seem to be of the Eurasian descent. The Department of Environmental Conservation claims they got out of several hunting preserves in the south central part of the state. They are now considered established in Onondaga, Cortland, and Tioga counties. Hogs have been considered established for about five years in the eyes of wildlife managers in New York State.  Read More
Nuisance Geese in New York 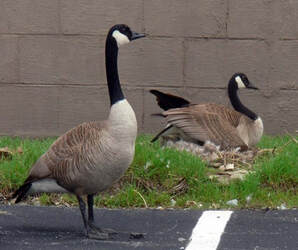 Canada Geese have always been present in the state of New York in some numbers. They are a large bird with tan bodies and black heads with a white chinstrap. Geese harbor a 50 to 67 inch wingspan, and can weigh between 6 and 20 pounds. There are 11 recognized subspecies of Canada geese, and most are determined by body size and breeding habitat. Geese are herbivorous and dine on a variety of plant materials. These foods include grasses, seeds, berries, aquatic plants, and especially agricultural grains. Canada geese mate for life, and they begin nesting in April in most of New York. The female lays between 2 and 8 white eggs, and she incubates them for about 25 days before hatching occurs. The goslings are born yellowish in color and quickly grow over several months in order to be ready for the fall.
Two distinct populations of geese are present in New York; migratory and resident. The migratory birds nest in Canada and journey to the southern United States to wintering grounds. They are usually only present for short periods of time in the spring and fall as they migrate. The resident population is present year round, moving only short distances or not at all during the winters. These are usually the geese found at parks, ponds, and golf courses during the summer and winter. Resident birds are most often the ones considered to be “nuisances”.  Read More
Beaver Management 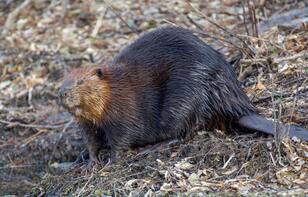 Beavers are one of the most beloved creatures of North America as they have premiered in many children’s literature stories, cartoons, and mythologies as well as supplied humans with the knowledge of how to build effective dams and have sacrificed their furs to clothe us. Beavers are the largest semi-aquatic rodent and can weigh more than 60 pounds and grow several feet long when they are full grown. They have water-resistant coats, large buck teeth and a large scaly tail that they use to build their dams and to swim. Beavers are also known for building superb dams that can stop the water flow create entirely new ecosystems.  Read More
Wolf Management 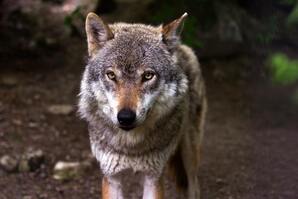 Wolves were once found across the northern hemisphere of the planet, including most of North America. When Europeans began to colonize America in the 1600s, wolves could be found in each of what are now the lower 48 states. As human populations grew so did fears of wolves and other predators and the perceived risks they posed to personal safety, livestock, pets, and game species. Extensive predator control programs, magnified using bounties, trapping, poisoning, and combined with habitat degradation and a declining prey base, the complete destruction of the population of wolves from most of the lower 48 states early in the 20th century, with only a few hundred remaining.  Read More
Wild Turkeys 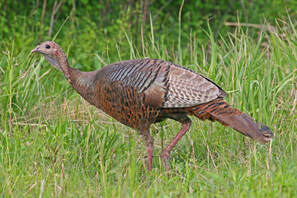 Wikipedia
History of The Wild Turkey: Turkeys are native to the almost the entire eastern half of the United States, southeastern Canada, and central Mexico, with significant populations in the western U.S. Wild turkeys in North America were aggressively hunted for game in the 19th century and there were fears in the early 20th century that wild turkeys would soon be extinct. As human populations grew in the 1800’s, so did the demands for wild turkey meat. Entirely unregulated subsistence and market hunting were excessive and took their toll on populations. Accounts list single-day harvests that often numbered in the hundreds of birds being hunted and killed. Severe habitat loss during the same period also occurred and magnified the effects of unregulated harvest. The untouched forests were cleared for farmland and urban development and most in the East were gone by 1850, with those in the Atlantic coastal region especially hit hard.  Read More