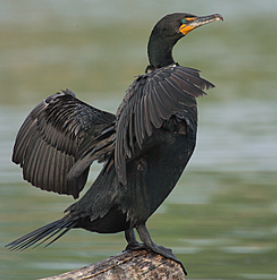 The Double-crested Cormorant (Phalacrocorax auritus) is the most abundant and most widely distributed species of the 6 North American cormorants. This bird can be found breeding and wintering on both the East and West coasts and is also found inland at bodies of water in Canada as well as the United States at different times of the year. Not always found in the Great Lakes Basin, a population present in the prairies spread eastward and began nesting in the Great Lakes region in 1913. A large dark bird with black or dark brown plumage, orange/yellow throat, lengthy (70-90 cm), and large body mass (2.7-5.5 lbs). Male and female are very much a like with the male sometimes slightly larger in size.

The Double-crested Cormorant opportunistically feeds on fish by diving under water and hunting them. Their web feet make them exceptionally strong swimmers. Cormorants are often found in large numbers feeding on species of fish that are readily available in a particular area.

Legal Status
Double-crested Cormorants are protected by the Migratory Bird Treaty Act, their nests and eggs cannot be disturbed, and the birds cannot be captured or shot, unless a depredation permit is first obtained from the U.S. Fish and Wildlife Service.

Double-crested Cormorants have had resurgence in population since the banning of DDT in the early 1970s. Significant increases have occurred in Canada, Interior, Northeastern, and Southeastern United States. Though the population is growing, biologists believe that this may level out due to disease, and lack of adequate nesting areas. Because of the increase in population, cormorants are more visible at areas of sport fishing and aquaculture operations. The population increase of this bird has therefore been the subject of concern and controversy for some time.

Cormorants as a Nuisance

The source of labeling this bird a nuisance is chiefly due to the fact they predominately feed on fish. They also may compete for nesting habitat with species of concern, or where they do nest they may have an adverse effect on vegetation.

Recreational and commercial anglers have expressed concern that these fish are having a profound effect on sport fish and/or pan fish. Because Cormorants feed on fish based on their availability and size (3 to 5 inches), targeted species will vary greatly depending on location. In the Great Lakes Basin for instance, species such as alewife, yellow perch, or gizzard shad make up a significant part of the birds diet. It is known that cormorants do consume sport fish such as steelhead, lake and brown trout, especially when they are stocked at a young age in shallow water. In the open water however, diet studies show these fish are not consumed in large numbers. More studies are needed to make more accurate management decisions based on concerns of anglers.

Double-crested Cormorants conspicuously feed on small bait fish raised in open ponds. They also may frequent a body of water used to commercially raise fish for human consumption. Due to this issue, recent legislative action in some parts of the country has begun in an attempt to control cormorant populations.

Cormorants will either nest in trees or on the ground where predators will not pose a threat. After sometime, the birds' excrement will kill the actual trees they nest in or the vegetation beneath them. Also, in some nesting sites cormorants may compete with species of conservation concern. For example, in the state of New York where a species of special concern, Common Tern nests on Oneida Lake, efforts have been made to prevent cormorants from expanding there nesting territories and competing with Common Terns. Overall, depending on nesting sites, and number of nesting birds, Cormorants may be having an adverse effect on plants and animals and should be managed accordingly, especially where threatened or endangered species are present.

Though not the most frequent bird involved in aircraft strikes, they do pose a serious threat because of their size and weight. These birds have been known to cause extensive damage to aircraft and they should be a concern for airports near bodies of water.

Generally pyrotechnics have been widely utilized to haze or harass Cormorants. Also, balloons and scarecrows are devices that may be placed to deter cormorants from nesting in certain areas. Aquaculture facilities have exercised a variety of techniques to keep Cormorants from landing and feeding on ponds where fish are being raised. These include suspended nets, wire systems, floating ropes, and planting large trees around ponds. These methods help keep groups of cormorants off bodies of water because these birds need a large expanse of water to land and take off.