The turkey vulture (Cathartes aura) is a widespread raptor throughout the United States, which has developed a highly successful niche in nature as a forest scavenger. The population success of this raptor can be attributed to its highly developed sense of smell, allowing it to detect viable food sources (such as dead animals) from large distances (Owre and Nothington, 1961). Furthermore, their ability to exhume carcasses allows the turkey vulture to exploit nutritional resources that are often buried and cached by other land mammals and bird species (Whitaker and Hamilton, 1998).

Its small red bare head, long tail feathers, and long silver flight feathers can distinguish the turkey vulture. It is often found soaring high in the air, searching for carrion and may be seen solitary or in large groups. It can also be delineated based on its large size, with a wingspan of roughly 67" (adult) and weight of about 4 lbs (adult). Though not often heard, the turkey vulture makes hissing and clucking sounds, however, visual cues are most likely for detecting this bird.

Turkey vultures can be found in a variety of habitats, ranging from open fields to forests and have been quite successful in acclimating to an expanding urban environment; they can often be found soaring over cities, open fields, forests, and areas with decaying matter such as dumps. They are most prevalent in the summer months and migrate to warmer climates during the winter months.

Turkey vultures are classified as a migratory bird and are therefore protected under the Migratory Bird Treaty Act (MBTA); in New York State they are listed as a Protected Bird (PB); adult vultures, their young, nests, and/or eggs cannot be harmed without the proper depredation permits. To obtain a depredation permit, certain criteria must be met and a formal request must be filled out and approved by the proper federal branches of government (USDA and USFWS).

Turkey vultures are a migratory bird that can be found widespread throughout the lower 48 contiguous United States some southern portions of Canada and throughout Central America. During the summer (breeding) months, their range includes all of the lower 48 United States. However, during the winter months, the majority of their population migrates south to warmer climates such as the southeast states of the United States and Central and South America. In 2004, studies by Rich et al. estimated the United States population of turkey vultures to be at about 1,305,000 individuals; moreover, in 2010, a similar study by Ruelas Inzunza et al. estimated a count of 1,895,679. These counts suggest a rapid increase in turkey vulture populations, which can likely be attributed (at least partially) to rapid urbanization and their protected status.

Turkey vultures do not build nests in the "traditional sense." They lay their eggs in rocky outcrops, sugar can fields, hollow stumps, caves, or even old raptor nests (such as hawks). Their almost always produce a clutch size of two individuals and experience high nest success, which can help attribute to their present population increase.

As a result of population increases and their acclimation to urban environments human-vulture conflicts have increased and will likely continue to increase in the future until new management is established for this species.

As the population of turkey vultures continues to increase, the raptors come into contact with humans more frequently. This interaction has resulted in several different types of human-vulture conflicts.

Furthermore, due to their exceptional sense of smell, turkey vultures often dig up once buried animals (either by humans or other animals), this action has the frees any rotting carcasses to an open environment where people (especially children) may encounter it. To reiterate, dead animals can be a vector to harmful and often deadly illnesses and/or parasites.

Though uncommon, turkey vultures can be a traffic hazard. The turkey vulture is a relatively large bird and can cause serious damage to a moving vehicle and has the potential to cause car accidents.

Due to their large size, weight, preferred habitat and relatively slow flying behavior, turkey vultures have the potential to cause serious damage to aircrafts and are considered the second greatest threat to aviation safety, next to deer. This hazard rating to aviation exemplifies the need to develop strong mitigation techniques.

From 1990-2003, turkey vultures represented 19.2% of all raptor birdstrikes (Cleary et al., 2004). During this same time period, red-tailed hawks and vultures accounted for 93.4% of civilian aircraft down time as a result of strikes; this translates to roughly $7 million dollars to civil aviation during that 14-year period (Cleary et al., 2004). Similarly, these same raptors accounted for 64% of damaging strikes to the U.S. Air Force (USAF).


Management Options
Several options for turkey vulture control exist, all of which fall under two categories, lethal and non-lethal control. Non-lethal control and/or habitat modification do not necessarily require a permit (depending upon the method chosen), however, lethal control methods will require a federally issued permit to allow for removal of this species.

Non-lethal controls are methods that are devised to alter the animal's habitat to deter it from returning to the area. These methods range from habitat modification to direct hazing, which may require a special permit.

Turkey vultures are associated with a broad array of habitat types and are likely in search of food and (pending the time of year) nesting habitat. One can modify a habitat by minimizing preferred food sources and habitat type; doing this should create a habitat that would likely not attract turkey vultures.

Utilizing roosting deterrents such as bird spiders � and spikes is another method to make potential roosting areas (such as dead trees and roofs) less attractive to turkey vultures.

Turkey vultures are federally protected under the Migratory Bird Treaty Act and can thus not be trapped for removal without a special permit allowing one to do so. This method can also be expensive, labor intensive, and potentially dangerous.

A simple method to make land less attractive to turkey vultures is to identify and remove any carrion from the property. Turkey vultures feed almost exclusively on carrion; removal of such matter would create an environment virtually devoid of any food source.

Turkey vultures are federally protected under the Migratory Bird Treaty Act and cannot be removed in a lethal fashion without a permit to do so. Lethal methods should be used only as a last resort if other non-lethal methods and habitat modification methods fail. 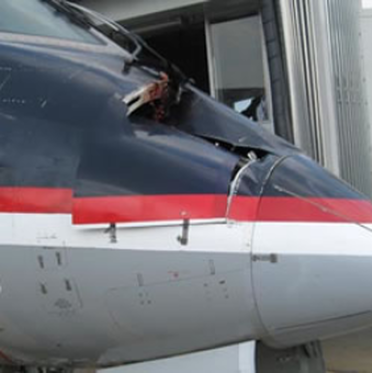 We are proud members of: