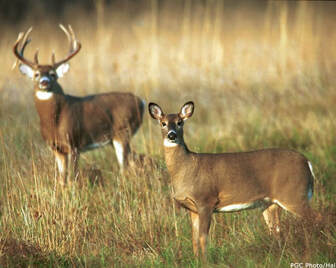 White-tailed deer (Odocoileus virginianus) is a common wildlife species found throughout the majority of North America due to their adaptability and successful reproduction rate. As an edge species, white-tailed deer are not restricted to one type of habitat, but can be found in a wide variety of settings.

White-tailed deer can run up to 47 mph and stand at the shoulder up to 4 ft tall. Their total body length is between 6-7.75 ft and can weigh up to 300 lbs. Their average lifespan is 6 years, but have been recorded to grow as old as 14 years in captive environments.

White-tailed deer are herbivores capable of consuming 5-10 lbs of vegetation daily. Depending on the state and habitats, they can have a a home range of 100-300 acres. Outside of a naturally forested area, urban landscaping and agricultural fields are also commonly utilized as food sources.

White-tailed deer are classified as a large game species within the United States. Population control and hunting regulations vary state-to-state based on the state’s management plan and unique environmental pressures. As game species are state property, proper licenses and permits will need to be obtained from the state before carrying on with a deer management plan.

Many issues can come from high density populations of white-tailed deer. Out of control populations may lead to dangerous vehicular collisions on the road and with aircraft on the airfield during landing and take-off sequences. As deer become more habituated to human presence, individuals may become aggressive during the spring fawning season and fall mating season.

Overgrazing is a major problem that not only can damage the understory of the local habitat that other species depend on, but also destroy agricultural crops and landscaping. These conflicts can be addressed through simple management techniques.

There are several options to choose from for white-tailed deer management for a group or individual trying to manage the populations on their property. The two major categories to managing wildlife species are comprised of lethal and nonlethal methods. Some methods are more costly than others or more effective depending on your long term and short term management goals.

When employed over a long period of time, some of these methods are the most effective as long-term management options.

For industrial purposes, chain-link fencing 10-12 ft tall is suggested to exclude white-tailed deer from hazardous areas such as airfields and high traffic roads. Other fencing options are also available, although not as effective, such as: double row fencing, outward slanting fencing, and electrified fencing.

Deer can jump incredible heights, upwards to 9 ft, therefore fence height is key. For residential purposes, a light fence or netting that can cover landscaping or a personal garden can still be effective at excluding deer from browsing on vegetation.

Chemical and home remedies can serve as ways to deter deer. Chemical repellents that work through sense of smell and taste are available. Chemical repellents must be applied frequently throughout the growing season and can become costly and potentially even cause damage to plants. Some home remedies such as human hair or fragrant soaps may work better for private home owners.

Frightening devises such as noise makers, lights, and balloons are effective for short-term use, but overtime deer can become habituated to their use. Owning a dog or using a trained working dog to scare deer is a very effective long-term frightening device in private and public circumstances. The frequent presence of a dog on a property will lower deer presence.

Landscaping with plants that are unpalatable to deer (often labeled on packaging) or that provide low nutritional value are encouraged. The only time these may become an attractant is during a excruciating winter,when natural food supplies become scarce. There is an argument made for supplemental feeding away from the impact site, but it is not advised and often has major negative side effects.

Check with your state game agency before acting on any sort of capture and relocation project. Relocation of deer can potentially spread disease and parasites into healthy populations. Often times, if the individual is in poor health, it will not survive being relocated.

Capture techniques include use of a drive net, drop net, rocket net, corral trap, clover trap, box trap, or chemical immobilization by a licensed professional. Permits need to be obtained through your state game agency prior to any capture and relocation activity.

Although highly expensive ($300-$1000/deer), this is a highly effective long-term management plan, but not immediately effective. Fertility control will keep the current population from growing at a significant rate, but will not eliminate any current individuals if you have problems where the population is already too high for the local environment. This action can be done surgically, chemically induced by a dart, or by ingestion of chemically laced bait.