Loomacres Wildlife Management provides a range of management options to mitigate depredation at fish hatcheries. Loomacres offers a management plan that integrates a suite of tools and techniques to exclude, deter, and remove predatory wildlife from the hatchery environment. We use a variety of non-lethal harassment techniques to discourage predators from returning. Examples of non-lethal techniques are as followed.
When appropriate and necessary, the use of lethal removal of some predators may be used to reinforce the effectiveness of certain applications. Loomacres also offers trapping services to remove predators such as the following.
Double-crested Cormorant 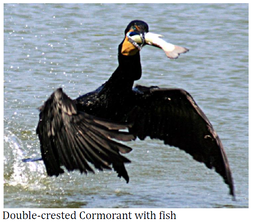 The Double-crested Cormorant (Phalacrocorax auritus) is the most abundant and most widely distributed species of the 6 North American cormorants.   This bird can be found breeding and wintering on both the East and West coasts and is also found inland at bodies of water in Canada as well as the United States at different times of the year.  Not always found in the Great Lakes Basin, a population present in the prairies spread eastward and began nesting in the Great Lakes region in 1913.  A large dark bird with black or dark brown plumage, orange/yellow throat, lengthy (70-90 cm), and large body mass (2.7-5.5 lbs).  Male and female are very much a like with the male sometimes slightly larger in size.  Read More