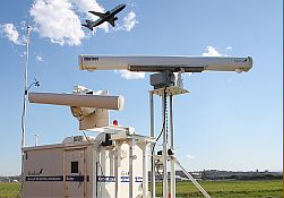 Development of radar technology began years before the Second World War and has been modified for a wide array of applications ever since. The use of radar for avian observation and management is a relatively novel application, yet advancements in this field have also grown immensely over the past few decades.

Radar detection involves the transmission of radio waves, a type of electromagnetic radiation, and gathering data from the waves as they reflect off of other matter back to the receiver. Radar is particularly effective because it allows the detection of objects beyond the range of human sight and works in both total darkness and many low-visibility conditions.

Over the past fifteen years, the FAA has been involved in researching and testing avian radar at airports. The types of radar antennas used on airports are generally either slotted array or parabolic dish antennas. Slotted array antennas have a larger total detection area than parabolic dish antennas but have a more limited range. Additionally, a single slotted array antenna provides no altitude data unless its configuration is changed from horizontal to vertical. Parabolic dish systems can provide both range and altitude data.

Avian radar is used on airports for the primary goals of preventing bird strikes and aiding in wildlife management. When birds in the area are detected, personnel on the ground can use this data to properly handle the hazard and warn pilots. Timing of flights and other coordinated movements on or around the airport can be adjusted to maximize safety. Additionally, radar can be used to gather data on patterns and trends over long periods of time. Patterns among migratory bird flight paths and smaller movements among resident birds can be elucidated by radar. Roosting sites, nesting sites, and other areas of concern can be revealed as well. If configured correctly, radar can provide exact altitude data that otherwise might have to be estimated. All of this information is extremely useful when conducting Wildlife Hazard Assessments (WHA) and developing Wildlife Hazard Management Plans (WHMP) for airports. Seasonal and weather-related patterns can easily be tracked and identified with radar. Avian radar can also provide more concrete data on the effectiveness of previously applied management techniques.

Radar allows birds to be tracked 24 hours a day. This is important because many species migrate at night when they cannot be easily observed by personnel. Resident owl activity is also of concern as this guild has caused millions of dollars in damage to aircraft. Radar can also be effective in suboptimal weather and extreme temperatures. Obtaining the data that radar can provide over extended periods of time would be incredibly difficult and time consuming for a team of human observers. Radar, while initially expensive, may save time and money over the long term in this respect.

The FAA recognizes the value avian radar can provide when developing a Wildlife Hazard Management Plan for an airport, although their use is not mandatory. For radar systems to be used, however, they must meet certain standards set by the FAA. Specific standards that must be met include detection performance, data tracking, detection response time, inspection frequency, weather performance, signal fidelity, data storage, display standards, and data presentation. These standards as well as other guidelines are outlined in detail in Advisory Circular 150/5220-25.

Current radar systems have limited capabilities. Personnel can monitor radar and detect when potentially hazardous bird congregations or movements appear and relay that data to the ATIS, wildlife controllers, or pilots. However, the dynamics of bird flight are very complicated. A bird's flight path, speed, and altitude are all very variable. More research is being done to understand avian flight patterns so that radar data can be interpreted quickly and most effectively.

Radar operators must be able to accurately and quickly interpret radar data. Certain weather conditions, ground movements, and insects can create result in unwanted signals and clutter which must be discerned from real threats. Additionally, lag time between receiving reflected waves and their expression on the screen must be taken into account when analyzing radar data. By the time that information is presented on the screen, the position of a bird or flock has likely already changed. 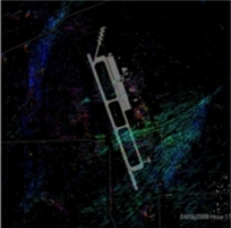