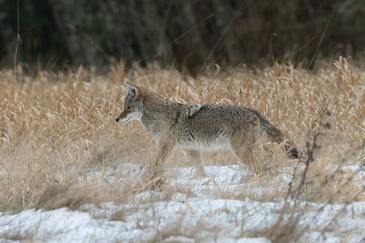 Natural History
The coyote (Canis latrans) is a widespread member of the dog family.  They range in size from 20 – 50 lbs, and are larger than a fox but smaller than a wolf.  Coyotes can be identified by a slender muzzle and pointed ears.  They also have a bushy tail that often has a black tip.  Their fur is often a grayish-brown or yellow, however, all black and albino coyotes have also been observed.

Coyotes are an extremely adaptable species.  This allows them to utilize almost any habitat found in North America.  They can be found in deserts, arctic tundra, swamps, forests, grasslands, and cities.  They are also excellent swimmers, and can occupy islands far from shore.

Coyotes are also generalists in their diet.  They have keen eyesight, hearing and vision, and can run at speeds of up

Adult Coyote (Canis latrans)
to 40 mph.  These traits allow them to catch a wide variety of prey items.  The majority of their diet is made up of small mammals like rabbits and rodents.  However, they can also kill deer and several types of livestock.  Coyotes will also eat birds, snakes, berries, vegetables, and carrion.

The majority of foraging by coyotes is done at night and early morning; however, they are also active during the day in areas with less human presence.  Coyotes typically hunt alone or in pairs.  They will also hunt cooperatively as a pack to bring down larger prey.

Like other members of the dog family, coyotes are social animals.  About 80 percent of coyotes belong to packs of 3-7 individuals.  These groups will defend areas that they utilize for hunting and the locations of den sites.   They also live alone as transients or as a breeding pair.

Coyotes typically mate between February and April.  The gestation period lasts for 2 months at which time they produce an average litter size of approximately 6 pups

Population Trends
Today populations of coyotes are believed to be at an all-time high.  They are found in every U.S. state (excluding Hawaii) and most of Canada and Mexico.  This explosive
population growth is the result of several factors.

When European settlers began establishing settlements in North America, the gray wolf (Canis lupus) and the red wolf (Canis rufus) were the dominant canid predators in the Northeast and Southeast, respectively.
At this time the range of the coyote population was most likely limited to the prairie regions of the Great Plains.         However, as European populations began to expand westward, large tracts of forest were cleared.  Corridors for roads, railways, and bridges were also created.  There was also widespread persecution of the wolf because of their perception as a livestock predator.

Wolves were a main competitor of coyotes and had previously helped regulate their population levels.  The newly fragmented habitat of forest stands, corridors, and agricultural fields allowed the adaptable coyote to increase their range.  As settlers continued to move west coyotes followed, feeding on dead livestock, horses, and garbage.  Throughout this time their population increased in numbers.

Legal Status
The status of coyotes varies from state to state.  In some areas, including most of the western U.S., coyotes are classified as predators and can be taken throughout the year.  Other states only allow coyotes to be taken during specific seasons, and/or by specific means like trapping.  Several states also allow permits for taking protected coyotes that have been documented as preying on livestock.

Human-Coyote Conflicts
Because of their opportunistic foraging and presence in almost all habitats, coyotes are frequently viewed as pests.  They can cause several types of damage in both rural and urban settings.

Livestock Depredation
Coyotes are viewed as the most common and serious predator of livestock in the majority of their range.  They frequently attack sheep, goats, and poultry.  They may also attack cattle and hogs.  Depredation from coyotes can cause significant monetary losses of millions of dollars each year.

Agricultural Damage
Coyotes can also impact agricultural crops.  They have caused large losses of avocados, watermelons, and other citrus fruits.  They have also damaged drip irrigation systems by biting holes in water pipes.


Aircraft Collisions
The presence of coyotes at an airport can pose a serious threat to aviation safety.  A plane on its takeoff or landing roll can strike a coyote on the runway resulting in damage to landing gear and/or engines.  The coyote could also jump prior to the collision and damage other parts of the aircraft.  These collisions can result in injuries and loss of life, as well as monetary costs in aircraft repair and downtime.

Coyotes are often attracted to airports because of the small rodents that inhabit grassy areas of the field.  They also scavenge garbage in waste disposal areas.
Attacks on Pets

Attacks on household pets by coyotes are not uncommon.  Cats are more frequently killed or injured than dogs. Some coyotes have even become specialized at hunting cats.

Domestic dogs are in less danger, however, this danger varies with their body size.  Large dogs are often viewed by the coyote as dominant, and the coyote will therefore yield part of their territory to them.  However, very small dogs may be seen as easy prey and killed.

Several preventative measures can be taken to protect pets.  Do not leave pet food outside, do not allow pets to roam at night, install a 6 foot fence around a yard, and dot not allow dogs to interact with coyotes.

Attacks on Humans
Instances of coyotes attacking humans are extremely rare. However, they have been increasing in frequency and may be life threatening.

This coyote was chased off a runway at Portland International Airport where it then boarded a light-rail train at a terminal.  It was removed by a wildlife official and released.

There have been 142 attacks reported in the last 40 years.  Two of these attacks have been fatal.

This rise in attacks is likely due to coyotes’ increasing presence in urban areas.  Attacks are also often the result of coyotes that have become unafraid of humans especially if they have been fed by them.  Human behavior in some areas may also increase the likelihood of attacks.  Some people may react to the presence of coyotes by running away into a house, which is the behavior of prey.

Diseases
Historically, coyotes have not been a frequent vector for wildlife diseases.    However, they are affected by several parasites and viruses.  They are susceptible to rabies, like all other mammals.  They may also carry canine distemper, canine parovirus, and sarcoptic mange.  Sarcoptic mange is common in coyotes, affecting approximately 70% of the population.  It is also extremely contagious.  They can also be affected by same intestinal worms and heartworms as domestic dogs.

Management Options
Many different methods are available to reduce the damage/danger caused by coyotes.  These strategies vary in effectiveness and are often work well when several methods are used together.

Habitat Modification
Exclusion of coyotes through proper fencing is one of the most effective methods for keeping them out of a specific area.  Coyotes are able to climb over, dig/squeeze under, and through many types of fences.  To help prevent this access, fences should be constructed of net wire-mesh (with no more than 6 inches between stays), be at least 5 ½ feet high, and have a wire-mesh apron buried below the surface.

Electric fencing can also be effective at coyote exclusion, especially when wire-mesh fences are supplemented with electricity.  Electric fences are also less expensive but may be illegal in suburban areas.

Removing as many food sources as possible from an area will also make it less attractive to coyotes.  All carcasses should be removed garbage should be kept in a secure location.
Reducing rodent and other prey species populations can also help reduce the presence coyotes.

Thick and tall vegetation provides cover for coyotes and a potential food source.  Thinning or clearing this vegetation can prevent remaining in a given area.  Pruning low-hanging branches of trees and shrubs can also reduce cover.  Plants that produce fruits and seeds should also be removed and fruits on trees should be picked before they fall.

Repellants
Auditory and visual coyote repellants are likely to only temporary relief from coyotes.  They are most effective in areas where coyotes are still wary of humans.  However, if there is no real physical danger the coyotes will quickly learn to ignore these repellants.

Several different products are available for hazing and repelling coyotes.  Sirens, flashing lights, propane cannons, and scarecrows are some common examples.  Guard dogs, donkeys, and llamas are also effective at keeping coyotes out of pasture areas.

Trapping
Many different types of traps are available for capturing coyotes.  Some examples are snares, leg-holds, and box traps.  However, trapping coyotes is difficult, especially those that have been trapped before.  Coyotes learn from previous experiences that were unpleasant or frightening and will avoid them in the future.

Relocating trapped coyotes may also be ineffective.  It is likely that coyotes will return to the area that they were caught.  Also, putting them in an location where other coyotes have an established territory may result that animal being attacked or forced out of the area.

Lethal Removal
Individual nuisance coyotes that have caused damage to livestock or are a threat to human health/safety may need to be permanently removed.  Lethal removal can also reinforce other coyotes’ wariness of humans.    However, these methods may be ineffective in some instances because another coyote may move in to the area after a coyote is killed.

Shooting is frequently used as a lethal control method.  Coyotes can be electronically called to an area, hunted with dogs, hunted from planes, or killed at den sites.  Night-shooting with spotlights is illegal in many states.

Fumigants that release carbon monoxide into dens are also available.  This causes the coyotes inside to suffocate.  Coyotes have been poisoned in the past, however, these techniques are now illegal in many areas due to their affect on non-target species.