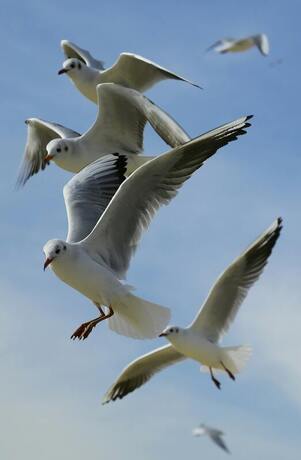 Gull Characteristics
Gulls consist of a group 23 species of birds in North America and 44 worldwide.  They can generally be identified by their hooked beaks, long tapered wings, robust bodies, and webbed feet.  The adults of these species are white with gray and black on wings, back, and head.  The different species of this group are further identified by variations in these color patterns.  Two of the most common and widespread gull species are the herring gull (Larusargentatus)and ring-billed gull (Larusdelawarensis).

Gull Ecology
Gulls are typically associated with coastal habitats.  However, in recent years various gulls species have moved inland and are able to utilize a wide variety habitats and water bodies.

Most species of gulls are prey generalists.  They are carnivores and will readily feed on live prey such as fish and crustaceans.  They will also eat the eggs and chicks of other birds.  Gulls will also frequently scavenge carrion and human refuse.

Gulls typically nest in large densely packed colonies.  In these locations they commonly nest on the ground or on other flat surfaces.  Several species also form their colonies on cliff faces, using the height of this habitat as protection from predators.  In the past several decades gulls have begun utilizing rooftops as a nesting habitat.  Tar and gravel roofs are particularly attractive due to the nesting substrate that the gravel provides.  Elevated rooftops also provide protection from predators in the same way as a cliff band.  Nesting adults will actively defend each other’s nests in a behavior known as mobbing.  Adults will attack and harass a perceived predator by diving, defecating, making alarm calls, or even biting/pecking. Nesting seasons vary depending on the geographic locations.  However, a clutch of 2-4 eggs is laid in May with chicks hatching approximately one month later.  Gull chicks may take up to 2-4 years to reach maturity.

Many North American populations of gulls winter in the southern U.S., Pacific and Atlantic Coasts, and South/Central America.  In the summer months they typically migrate to more northern latitudes, the Great Lakes, and Canada.

Gull Conflicts with Humans
High concentrations of gulls have the potential to cause several problems in populated areas.  A nesting colony located on a rooftop is a frequent cause of these issues.

Birds nesting in this habitat can cause severe damage to the rooftop reducing its lifespan.  They may bring nesting materials onto the roof and deposit feathers which can collect and decompose, damaging roofing material.  These materials can also clog roof drains and be drawn into ventilation systems, creating a health risk.  Large numbers of birds will also defecate on the rooftop.  High concentrations of feces are corrosive and can degrade the roof surface.          Over time this will result in structural damage and a roof needing to be repaired or replaced.  Adults bringing back food to chicks may also regurgitate on the roof surface creating further damage.

These birds will also defecate on cars, parking lots, walkways, and potentially people entering a building with a nesting colony on the roof.  This also creates a health hazard and may prevent the public from using the services provided at a given building.

It is also possible that a gull defending its nesting colony or attempting to feed may attack a person near the colony.  This may result in potential liability for the building owner.

A nesting colony of any gull species is also very noisy.  If this colony is located in a residential or business area, the noise created by the calls of the birds can greatly disturb people in the area.

All of these impacts can occur at a port or marina.

Gulls may also congregate at city parks with a water source.  Feces accumulation at these locations can also result in the closing of swimming areas due to bacteria levels.  E. coli, cryptococossis, salmonella, and histoplasmosis have all been found in gull droppings.

Gulls may also feed on agricultural crops such as blueberries.  Damage of crops can result in substantial monetary loss.  This same depredation can also occur at fish hatcheries.  Gulls may also be attracted to cattle feed lots where their droppings may contaminate food sources.

Gulls at Landfills
Gulls are attracted to landfills because of the large amount of edible waste that is available year-round at these sites.  When gulls are not feeding at these sites they may fly above the landfill at elevations of up to 3,000 ft.  This creates a potential hazard for aircraft operating nearby.

Gulls at Airports
Gulls are considered to be one of the most hazardouswildlife threats to aviation due to their mid- large body size and potential to form large flocks.  Collisions with gulls have resulted in millions of dollars in damage and is a serious threat to human safety.
Gulls can be attracted to airports for several reasons.  Precipitation events may bring worms onto paved areas, providing a food source for gulls.  Insects present on the airfield may also provide a food source.

The birds may also be attracted by open water that provides an area for the birds to loaf during the day.  Flat-topped roofs may also provide a loafing or nesting area at an airport.

Management Options
There are several potential actions for preventing gulls from using airports or other sensitive areas.  An integrated approach that uses several control methods along with habitat modification is often the most successful.  Managers will also have to remain continually vigilant over time to prevent the return of gulls.

Habitat Modification
Excluding gulls from water sources and nesting sites can be highly effective at preventing gulls from using a given area.  The most effective method of exclusion is placing a wire grid over an area.  Wires should be spaced 20 to 40 ft apart, depending on the problem species.  Nesting can also be discouraged through egg addling.

Bodies of water should be removed whenever possible.   It is also possible to reduce the attractiveness of a body of water by applying Methyl anthranilate, a taste repellent.

Prevent feeding in any area by putting up signs advising of the danger of feeding birds and patrolling these areas.  All waste disposal areas should also be covered and “wildlife proof.”

Harassment
Pyrotechnics are a very effective method of bird harassment.  They can be aimed directly at a group of problem birds.  They also require a person patrolling in a vehicle to fire.  The birds will then associate the vehicle and person with the harassment, not just the sound.  Several model are available that are very affordable.

Propane cannons are used in several areas to disperse problem birds.  However, they are less effective because they may not be located directly near problem birds.  Gulls will also quickly habituate to this form of harassment.
Distress calls are also used in several areas to disperse gulls.  However, like propane cannons, gulls will quickly learn that this sound is not a threat to them.

Lethal Control
Killing gulls may be necessary to reinforce many non-lethal control methods.  Lethal removal will prevent gulls from becoming habituated to audio harassment, because they will associate these sounds with seeing a member of their flock killed.

An important case study in lethal control can be seen at JFK airport.  A large colony laughing gulls (7,500 nesting pairs) formed each year near the airport.  These birds posed a significant threat to aircraft.  In response, personnel began shooting gulls flying over runways.  From1991 to 1997, over 47, 000 gulls were shot.  This helped reduce the number of strikes from over 150 per year to less than 20 per year.  However, no significant impact was observed on the regional gull population.